Here’s one of my first attempts at writing a desire line. I’ve pasted the text and images here, but I’ll include the map at the bottom as well, so you can see how the writing fits into the geography. 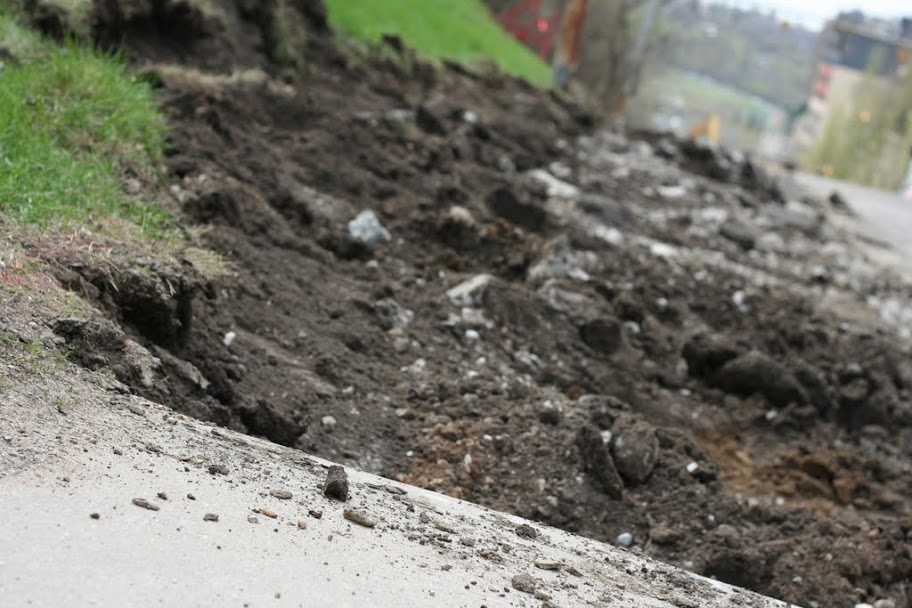 from the poem by Shel Silverstein:

There is a place where the sidewalk ends

And before the street begins,

And there the grass grows soft and white,

And there the sun burns crimson bright,

And there the moon-bird rests from his flight

To cool in the peppermint wind.

I can picture the anthology of Silverstein’s work that contains the poem – a white dust cover, frayed around the edged from being pulled and replaced so many times in my bookshelf. The drawing on the front shows a sidewalk, quite literally, ending. It’s an end of the world type of picture, or rather, edge of the world – if the world were as flat as these concrete slabs. In the picture, at the end of the sidewalk, there’s a child, peering over the edge, as if trying to see what’s holding it up. In the illustration, there’s nothing. Just white space. The child has nowhere to go.

When I reach the end of the sidewalk here, I pause. There’s a backhoe half a block down, digging up more concrete, but it’s left plenty of earth to stand on. I consider walking through the rubble, but then I see, on the other side of the road, where there’s no concrete at all – the signs of footsteps. Where the sidewalk ends, a path begins.

We shall walk with a walk that is measured and slow,

And watch where the chalk-white arrows go

To the place where the sidewalk ends. 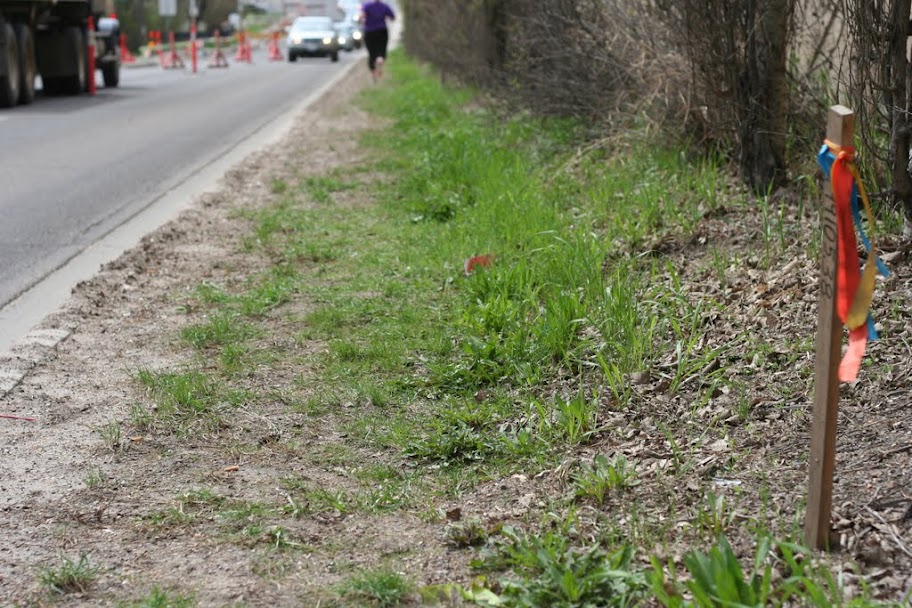 A path begins where the sidewalk ends – tenuous at first, staying close to the comfortable concrete of the curb, but gradually it wanders, widens, and fills the full space between the road and the trees. The grass fades, seems almost to retreat back into the earth, and the soil is packed down,  dried, hardened to the colour of concrete. And still, the earth moves with the passing of feet, and the ground allows itself to be formed.

There is a place where the sidewalk ends

And before the street begins,

And there the grass grows soft and white,

And there the sun burns crimson bright,

And there the moon-bird rests from his flight

To cool in the peppermint wind.

You’ll find this desire line on the left hand side of the map frame – along 105 street, from 98 – 99 Ave. You can click on the photos and on the line itself to reveal the narrative.
View larger map

3 thoughts on “Where the Sidewalk Ends, A Path Begins”